Footsteps was set up in 2004 by Pip Hoyer Millar whose daughter Minty has cerebral palsy. Pip was told Minty would never develop beyond the abilities of a four year old and would never walk independently.

After a long search for an intensive physiotherapy programme, they were led to Poland where they found the unique ‘Spider’ apparatus. Having seen how the therapy was dramatically improving Minty’s condition, Pip and two of Minty’s therapists brought the ‘Spider’ to the UK and set up the Footsteps therapy programme.

Having started out with two therapists working from Pip’s outbuilding, Footsteps has now increased fivefold and continues to help hundreds of children with varying conditions and needs. 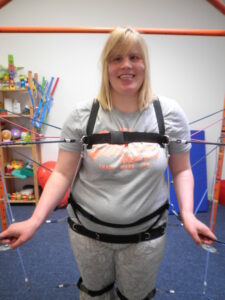 Minty continues to have regular therapy at Footsteps and is now able to walk, talk and lead an active and independent social life. It is down to the determination of Minty and her therapists that she has grown into the inspirational young woman that she is today.