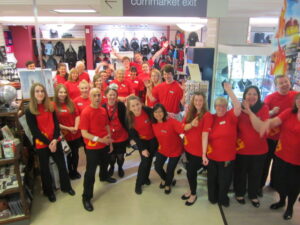 As part of the support that Boswells of Oxford are offering to Footsteps Foundation over the next year, the team held a fundraising weekend over the October half term and raised lots of money and awareness for Footsteps.

The team organised a number of activities including raffles and treasure hunts so there was lots going on to keep the children entertained while the adults shopped for Christmas presents!

We think the team look fantastic in their red Footsteps t-shirts! They raised over £200 during the weekend which means their fundraising total since April is £1,673. Well done Boswells and thanks for your support!