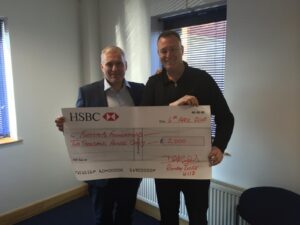 Thanks to the Herbert family, whose daughter Evie attends Footsteps, the Rokeby Lodge of Freemasons decided to make a generous donation of £2,000 to Footsteps Foundation. Evie’s dad, Gareth, attended an event hosted by the organisation and presented Footsteps to all of the guests. Thank you to Gareth and the Rokeby Lodge for their support.

The donation will fund 40 hours of much-needed intensive physiotherapy for children with cerebral palsy and other neurological disorders.