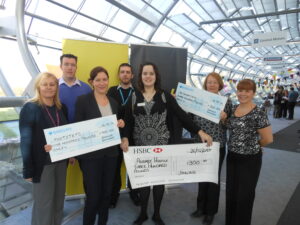 Swindon-based company Jaywing have just donated £900 to Footsteps Foundation following a number of fundraising activities the team have organised over the year.

Footsteps Foundation was nominated by one of the company’s employees and was soon after selected as the company’s favourite to receive 60% of the money raised throughout 2013.

The team have done a fantastic job at raising £1,500 for three charities. Employees have participated in marathons, leg waxing challenges, head shaves and onesie days as well as organising a number of events including cake competitions and quiz nights. So as well as raising lots of money for charity, the Jaywing team have had a lot of fun doing it!

Thank you to all of the team at Jaywing for their fundraising efforts. Their contribution of £900 will fund 18 hours of intensive therapy for children attending Footsteps. Thank you!