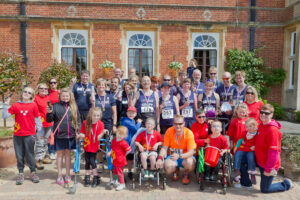 The 25th May marked the 2014 Wallingford Thames 10k run and this year Footsteps Foundation are set to walk away with a percentage of the profits. Over 500 runners participated and there was a great atmosphere throughout the morning.

The day was made extra special by having some of the Footsteps children there to give out medals to the runners as they crossed the finish line. The children, along with our volunteers did a great job at representing Footsteps. A special thanks to the Thames run Committee for supporting Footsteps Foundation this year, and also to Jaguar Energy Drinks for providing items for the goody bags. Thank you to everyone involved in the event. 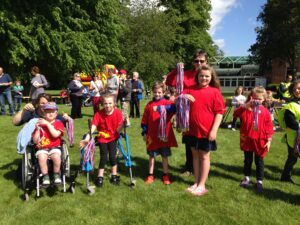 The 25th May was a busy day as the Footsteps team were also involved in a fantastic concert in Henley that evening.

The Missouri State University Concert Choir travelled all the way from the USA to put on a number of concerts around the UK. Their performance in Henley-on-Thames certainly pulled in the crowds and received some fantastic feedback. The talented 50-voice choir helped to raise over £900 for Footsteps Foundation which will help to fund over 18 hours of therapy for disabled children at Footsteps. Thank you to everyone who organised and attended.

So all in all, the 25th May was a successful day for Footsteps Foundation.