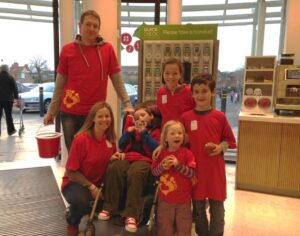 On Saturday 7th December, Footsteps volunteers took over the tills at Waitrose in Wallingford and helped to pack the bags of busy Christmas shoppers. Santa’s little helpers did a fantastic job at collecting money and over the course of the day we raised a total of £624.18! Thank you to everyone who helped and donated.