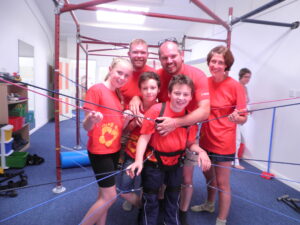 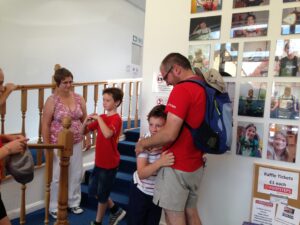 Ten year old Peter from Wales, has been a regular at Footsteps for the past few years. Before Peter came to Footsteps, he was unable to walk or sit up independently due to his cerebral palsy. Now five years later, Peter has come on leaps and bounds and  is able to walk with sticks. His confidence and independence have improved greatly and he always has a big smile on his face!

Peter’s dad Christian recently decided to take on a challenge to raise money towards the costs of Footsteps therapy, and having just completed a 70 mile walk from the source of the River Thames to Dorchester-on-Thames, he is well on the way to raising an incredible £2,000.

Christian teamed up with two friends and walked the distance over five days, completing the challenge with a big hug from Peter as he finished his therapy session at Footsteps.

Congratulations to Christian and his fellow walkers. They got through the camping, blisters and heat and have done an amazing job!