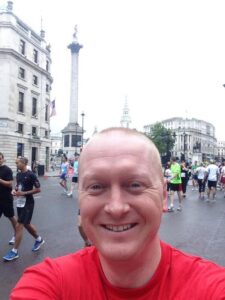 On Sunday 13th July, four Footsteps supporters took up the challenge of participating in the London British 10k race in aid of Footsteps Foundation.

They’ve all been busy fundraising and we look forward to hearing the total amount raised, all of which will go towards supporting children through the Footsteps therapy programme.

Runner Tim has given us a run down of his experiences and he’s even keen to get a team together to participate in an international marathon for Footsteps. If this is of interest to you, please email info@footstepsfoundation.com

On Sunday 14th July, I ran the British 10k for Footsteps Foundation and wanted to write my experience up for others considering running next year or thinking about fundraising for Footsteps.

I have run to raise money for charities before – In 2012, I ran the Berlin marathon and in 2013, I ran Paris – In the former I supported Whizz Kidz and in the second, Meningitis Trust – Both excellent causes.  Before you envisage me as some physically capable athlete at the top of his game, all lean physique and glistening frame, perhaps some context is in order.

After Paris in 2013, I slipped on a football pitch and did some grievous unidentified injury to my back.  The consequence of this was an extended absence from any form of exercise for a year.  By my own poor judgement, this did not coincide with a reduction in my frequent visits to KFC and my local curry house and within twelve months I added a rather embarrassing and shameful 15kg to my already generous frame.

Something needed happen to jolt me from the Colonels grip and when the opportunity arose to run for Footsteps Foundation in the British 10k, I seized the moment.  I had just a few weeks (my own planning and motivational issues) in which to shape up for the event but knew from various film montages, that this was eminently possible.  My first training run of just a mile and a half almost killed me. This was only 13 months after I had run 26.2 of them around Paris so this was not a good feeling.

So why Footsteps?  Well in my case, I have a family association with Footsteps through my magnificent niece.  Izzy was born in July 2010, my sister Jenny’s second child.  She was a happy baby but within the first year of her life it was apparent that she had significant development issues.  The realisation of this came when unlike other babies, Izzy did not learn to sit up on her own at 6 months. 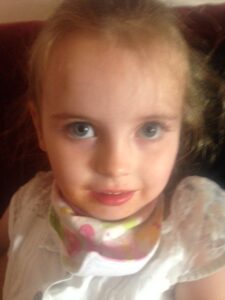 On her second birthday, Izzy was not yet vertical and my sister and her husband Pete were going through the NHS wrangler of tests and consultants with few answers.  The condition Izzy had was unidentified but seemed more and more certain to require lifelong care.  We had little experience of this in our family, we were learning as we were going.

Then came Footsteps.  Izzy attended physio and experienced the spider for the first time in her life.  Within a week of her first sessions, Izzy, in front of a ‘jaw-droppingly’ dumbstruck family, raised herself to her feet.  The amazing results of time spent with specialist equipment and the superb care and expertise of Footsteps had quickly given Izzy capabilities that we had worried she might never enjoy.

I was at her birthday party recently and now, she has the freedom of the place!  Her language skills have developed too.  The benefit of Footsteps therapy went beyond teaching Izzy.  The community and support it provided when experiencing the unique challenges of bringing up a child with severe developmental needs was irreplaceable.  Through Footsteps, things felt better, you are not alone, it will be OK and I report this as only her uncle, my sister would amplify the message.

So, in a nutshell – There are many good causes to run for but now, my heart has determined upon helping Footsteps.  Many families are not in the position to afford the sort of care that Izzy has received and Footsteps are there to financially support those in need of their services too.  What a tremendous cause.

Footsteps are not a huge organisation and so the support you get in the build-up to the race is not as extensive as others I have experienced.  Yet, that is also the beauty of it, for while smaller, it is much more personal.  The lovely Clare stayed in touch throughout, the fundraising bar was set at an achievable figure (£250) and everything was well organised.

The race itself is an excellent event.  A 5am start was a bit of a rude way to kick off a Sunday but it was necessary as I wanted to drop my bags at 8am and be timely at the start.  At Charring Cross, I was caught short but the 40 deep line of runners queuing to pay 30p to use the facilities concerned me.  I aimed myself at the very smart hotel attached to the station and in spite of my appearance, set about the concierge with all the charm I could muster and was directed accordingly.  Winning.

If there is one piece of generic advice I would give to would-be runners it is to leave plenty of time before the race starts.  There is always some last minute thing to be arranged, toilets, sun cream, drink etc.

There was a mile or so walk from the bag drop, behind Charring Cross to the start line, which I feared was using up precious energy that I would need later.  It took us along the Mall past Horse guards, turning a sharp right before the Palace, heading up past my favourite shop (Berry Bros Wine) before turning left onto Piccadilly with the Ritz to our left and further down, the fine Whisky bar at the Athenaeum to our right – Neither of which I was able to visit.

The British 10k had a core charity, Help for Heroes.  So at the start, we were treated to the Military Wives Choir bashing out a few renditions of something or other.  Being held far back in the pens where they keep the waifs and stragglers, I was not close enough to appreciate the rendition.  However, the military parade that streamed by was impressive, modern armoured assault vehicles led, with imposing gun turrets alarmingly pointing our way, a band of pipers and drums, looking very dapper, followed before a commemorative First World War era troop of lancers.  My main thought was whether I could hitch a ride.  A brief cooling downpour ensued and then, too much fanfare from the MC, the tapes went up.

While the gun time was 9.35am for the elite runners, this ‘start’ only signalled that the common folk would begin a ten minute shuffle forwards, along Piccadilly, before taking a sharp about-turn a mere 300m before the start line.  At this stage, many of my compatriots started to break into a jog, fools, 10k does not need to be 10.3k!

By the time I crossed the line, ten minutes had lapsed from the official gun time and the elite athletes had already completed a third of the course, I felt quite resentful.

The British 10k route takes you through central London, Whitehall, Embankment and then an about turn before the Tower and back.  The crowds were out and passionate and I would suggest to you that there is nowhere on Earth better than a ‘fundraising run’ to provide such a concentrated outpouring of goodwill.

I am not a fast runner and so I can only file a report from the back of the pack, amongst those in fancy dress and those of similar physiques to mine.  We stumble along like wounded animals, legs flailing, lungs screeching.  Frequent water stations are heaven sent, some is drank, some poured over my overheating frame, inventive costumes, crowds baying support… On this last note, I can assure anyone stood in a crowd for any endurance run that the participants do not want to hear grinning madmen hollering encouragement such as ‘you can do it!’, ‘keep going!’…. No, a much better shout would be ‘I’m so sorry for your pain!’  That might just be my opinion but try it.

The last few kilometres over Westminster Bridge, round the London bus parked at the opposite end, through Parliament Square and to the finish were made the harder for the arrival of the sun.  The last 20%, is where typically you breach the point at which you trained and stray into the territory I call ‘hanging on’.  It is damn tough anyway so the extra burden of heat was unwelcome.  However, a bit of inspiration can go a long way to seeing you home.  For me, as nice as the presence of the crowds is, I had a gorgeous little niece to run for.  Izzy – 9-10km was all for you – Thank You.

I completed in 65 minutes and was pleased enough with that given I only started training three weeks ago.  After collecting the medal (well done British 10k, no skimping there a solid piece of metal which I told my two sons, aged 6 and 7, that was for coming third!!), I meandered through the happy crowds and took my self-congratulatory selfie under the watchful eye of Nelson.  Without showering, I then subjected the poor unwitting tourists, who were minding their own business strolling through the National Gallery, to my sweat soaked presence for an hour of quiet time and reflection.  I would accept the charge that this, was a little uncouth.

The event has reignited a fire in me for distance running and my eyes are immediately drawn to the autumn half marathons.  The fetching red attire of Footsteps sets off my blue eyes and cropped head very well, I am sure you will agree.  If the National have not formally complained and if I have not dragged the good name of Footsteps into the gutter and if having read this, Clare will have me back, then, I am in.

I am also thinking of galvanising a wider Footsteps team to run a European marathon next year (I can recommend Berlin!).  If we could get a team together and work together to raise an ambitious sum of money, well, I would be happy to play my part – It is tremendous fun and we would be doing a very good thing.  Game?

I would heartily recommend Footsteps to anyone as a charity to run for.  Why?  Several reasons… They are appreciative of your work in a way that can get lost in larger causes.  The funds you raise go to a specific place and are used wisely and while they might not have the scale of event organising machinery of some of the corporate charities, they do have a great personal touch.  Get involved.